Hi guys, it's been a while since I updated this blog,
been working at 343 industries for the last months.

I've been updating my online sketchbook everyday.
Actually I'm proud to say that it's been 5 years
of constant daily posts with new artwork, here's the link:

Also here's another Diorama image I did for my portfolio. 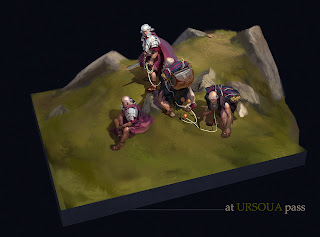 Here is a copy paste of a tutorial I did:
1) Do blocks of color,
you can use an old illustration you did or a photo ref.
2)Draw the perspective lines and major blocks,
get a feeling for the space.
3)On top of it start painting and define the overall,
don't focus on a tiny area.
4)Start zooming in and polishing, or poping elements,
is a good idea to use some soft edge brushes
in combination with hard edge ones.
5)On a new layer draw the silhouette of the mecha,
and charcaters and repeat steps 1-4 on them.
6)Use some masking selection and gradients to pop things more,
maybe play with the brightness and contrast too.
Use filters to taste, crop and save :-D 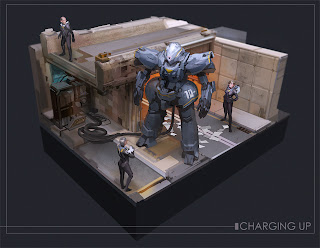 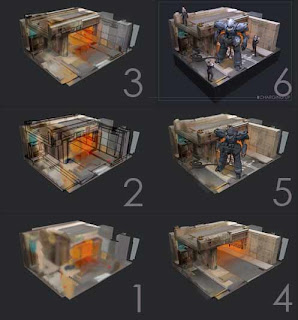 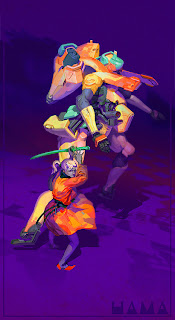 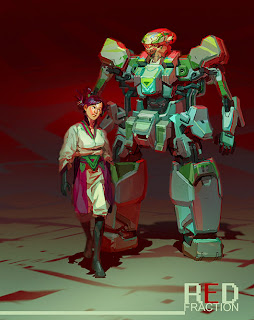 Started this working on the silhouette for each character,
then made a layer on top and sketched with linework all shapes.
Worked the colors for the girl and mecha,
and picked a red background and greenish light.
Merged all in one layer, on that started cleaning the whole thing
and rendering it, at the end cut and move or distort parts
and elements and played with some layer effects,
trying not to burn or loose the original rendering too much.
btw
Happy new year 2009 to everyone!
Posted by Robogabo at 6:00 PM 9 comments:

So, I've been doing the usual square color studies
with complementaries and analogs,
so what better way to try wacky colors
than with underworld characters :-D.

Here is some demon girls.

Oh and btw a quick update on my new PC,
the problem of getting totally frozen is still there,
and i think it has to do with the graphics card . . just a guess.

I started playing Left 4 dead and every time it will get frozen ,
so i lower all the video settings on my card and in-game,
and still would crash . . . .
my wife suggested to close the virus scanner,
which is constantly scanning ,
and for some reason it stooped freezing . 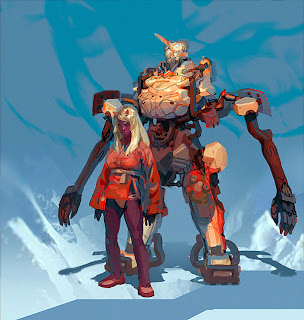 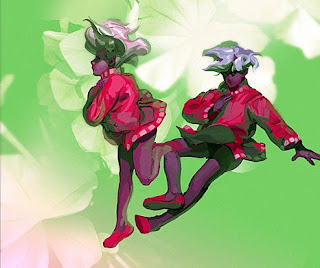 So I got into Monster Hunter 2 Freedom game for the PSP
and i can't wait for the Wii version that is coming out next year.

Here are some illustrations i made, based on the game,
i won't go into a review of the game but i gotta say
once you get into it, it becomes very addicting,
so be careful about that ;-)

A little about my character, HR5 completed all game till Lao Shung
(not killed but completed the quest) and 100% heavy bowgun baby,
then after not being able to complete monsters
like red khezu i changed to great sword
(valkirie blade working my way to Siegmund)
that's when i stopped playing the game since
i could not get the necessary material drops
after trying so many times :-( . . . that's my story.

Some good websites: Gamefaqs and Skies of Croda 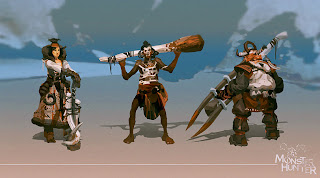 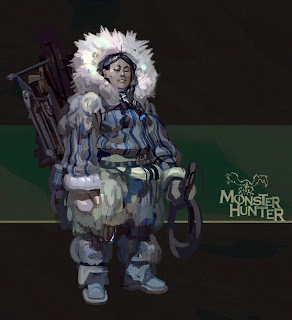 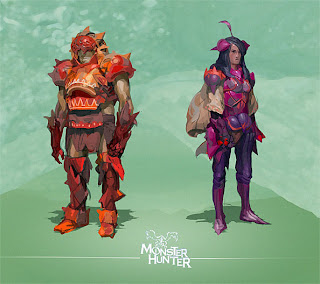 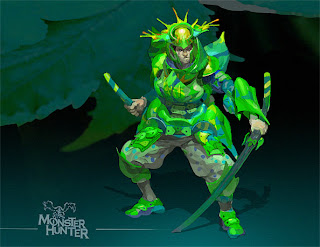 So i got a new PC, and i tried to stay below or at $1,500
the main function would be Photoshop, so for the scratch disk,
got a Solid state hard drive and didn't care much about 3d capabilities,
nor the quad core processor.

first test on it was trying some crazy
scaterring + dual brush+ none spacing + texture
BRUSHES at 170dpi , and i gotta say it was very smooth.

I usually work everything at 72dpi cause i like the speed,
with this machine i can finally upgrade to 170dpi for everything
and keep my speed addiction.

Altough, somehow i fear this Rig is not that stable,
yesterday it frooze meanwhile i was painting this image,
just frooze, never happened to me with windows XP
and the same version of PS been using for a while . . . only time will tell.

Here are the main specs:

Gotta give credit to my wife Kelly who was the mastermind
behind the planning of the new PC, great job baby <3 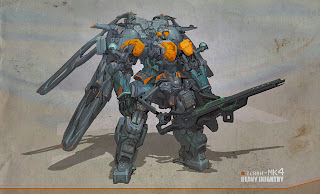 Yay!, results are out and i'm happy to share with
you guys, the good news :-) got a 3rd place in the competition.
The contest was great and as always FredH did a great job!

The competition was similar to Dominance War but with a comic book spin.
So the character i choose was Battle Angel Alita

I got some great critique and comments from the judges
and got another chance to share and have fun with a lot of talented artists.

Here is the page with the COMICON challenge results
I guess in retrospective i see that my illustration abilities
are still really weak, i don't feel very comfortable,
but i like more the concept art and brainstorming part. 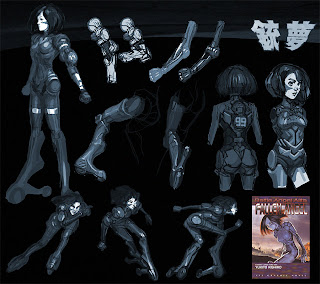 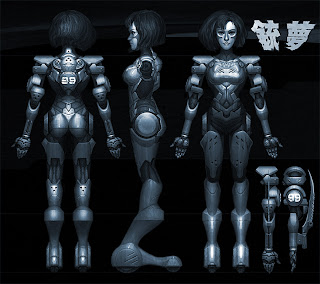 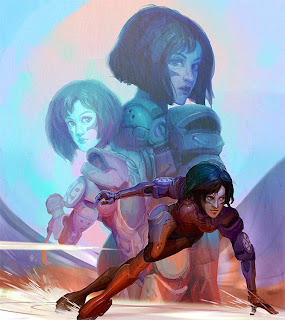 Alright, The competition of 2008 ended,
and I am really happy that i made it to the top finalists.

The contest was awesome, and being able to show the progress
of each of the entries and getting feedback was one of my favorite parts.

Also the organizers and Fred did a great job in the presentation
and overall management, being able to see what the judges choose and thought
about the entries was amazing, made me really happy to know
that great Pro Artists liked my entry.

Here is the link to the Dominance War III finalists
and my entry: And now some links to my favorite 2d entries of the competition, great job everyone! : Another Photoshop Mecha.
Not too happy with the Mass/volume interlocking.
Tried to show shared visual parts on both modes
to reinforce the fact that it transforms, but it doesn't look right.

Where does all that metal mass goes when in boat mode? not good enough
Posted by Robogabo at 7:33 AM 9 comments: more from the Vault Robot from the past Digging out the oldies a mecha inspired by David Levy's design's
Posted by Robogabo at 5:21 PM 5 comments: Added some updates to my portfolio and also created The Conga , a blog featuring links to some of my favorite artists.